I’d tell you that a lot of good things happened this week and quite a few wacky things – enough fodder for a few blog posts.

But the best thing that’s happened is my grandmother turned 88 years young today. So, I would be remiss in not saying happy birthday grammy and I miss being able to hop in the car and drive 20 minutes to see you. 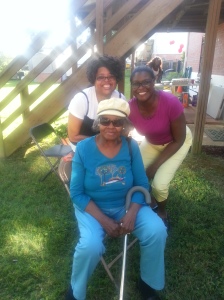 My grandmother, sister, & me

So, on that note this week’s coffee share is all about the positive.

A coworker friend of mine has not been happy at work for some time, and he finally found his dream job and they’re going to pay for the rest of college. I’m sad to see him go, but I’m super excited for him. It’s a great opportunity and it puts him in his field study and ahead of the game.

I found another creative writing group. If you remember I got kicked out of one for erroneous reasons. Anyway, we had a planning meeting last week and I think I’m really going to like these creatives. They’re just as quirky as I am. I’ve been reading some of their stories and I’m getting pretty amped to really start writing again.

I’m still on the the hunt for a church. The one I visited this past Sunday has its pros and cons, like any church.  The pro – the people were super nice and really quite welcoming. I didn’t feel as though I was being judged. Several folks came up to me and introduced themselves and I was invited to lunch. I like that it’s very diverse – racially, culturally, age, etc.

The con, and I’m not really sure it is because they were celebrating Christmas in July, is that the sermon wasn’t scripture based it was a testimony. I’m considering giving them another go tomorrow.

Well, I know I said this week was all about the positive, but I do have one negative/complaint. I came home yesterday to a note taped to my door. My apartment building is having the gas meters removed. Yay. That’s a positive, but the negative is that we won’t be able to cook for perhaps up to a week. Two weeks worse case scenario. So, I’m going to have cook for the week today and tomorrow because they’re starting the removal on Tuesday. Glad I have a crock pot.

And on that note I must go and begin my prep work.

Oh, I nearly forgot I received my Christmas in July present from Erika at The Book’s the Thing. It was waiting for me at my door when I got home from work Thursday. Thank you so much, Erika for the gift. 🙂 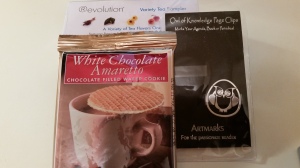 Don’t forget to join the coffee link up at Part Time Monster and share it on Twitter by using #WeekendCoffeeShare.